Prince Harry thanked frontline workers and made a passionate speech on Sunday about how we are facing “a viral pandemic alongside a digital pandemic.” It marked his first official appearance since traveling to the U.K. for grandfather Prince Philip’s funeral last month.

The Duke of Sussex attended Global Citizen’s“Vax Live: The Concert to Reunite the World” in Los Angeles and was among the many public figures asking world leaders to step up, highlighting the importance of vaccine equity. He served as campaign chair for the event with wife Meghan Markle, who did not make the two-plus hour trip from Montecito as she’s (very) pregnant with their second child. There was no shortage of star power, though.

Selena Gomez hosted the concert at Inglewood’s SoFi Stadium, one of the largest in-person gatherings since March 2020, which featured performances by Jennifer Lopez, Foo Fighters, J. Balvin and H.E.R. But it was Harry who had the crowd of thousands buzzing. 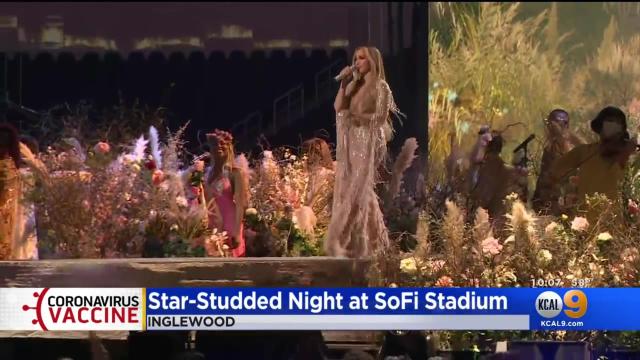 Harry made two appearances and received a standing ovation from the audience, which was made up of media and fully vaccinated frontline heroes. When he took the stage for a second time, he spoke about a cause that is clearly personal: misinformation spreading online.

“In today’s world, we are so connected like a vast nervous system, whether we are online or not. And much like the virus, there are no borders online. So when vaccine misinformation and disinformation spreads, magnified on social media and in parts of traditional media, it exposes a collective threat to humanity. I believe that misinformation is a global humanitarian crisis, and the crisis is getting worse,” he declared.

Harry, who urged people to get the COVID-19 vaccine, called out the “stark rise in vaccine hesitancy.”

“Hesitancy is not an option. Misinformation is not only simply harming those who believe it, but also those who don’t. We must tackle each of these issues head-on: vaccine equity and misinformation,” he said. “And if vaccine distribution moved half as quickly as misinformation, just imagine how many lives could be saved.”

While the Duchess of Sussex did not appear in person — which was never the plan — Yahoo Entertainment learned she will still be part of the telecast when it airs on May 8. President Joe Biden, first lady Jill Biden and Pope Francis are among those who also made taped appearances.

Despite flying solo, Harry seemed in great spirits. He happily waved and interacted with frontline heroes while walking on and off stage.

“Every single one of you in here are awesome, so thank you,” he said at one point.

During Harry’s first appearance — which had some women in the crowd literally fanning themselves as they heard his British accent for the first time in person — he said “we are at a defining moment in the global fight against COVID-19.”

“Tonight is a celebration of each of you here, the vaccinated frontline workers in the audience and the millions of frontline heroes around the world,” he remarked. “You spent the last year battling courageously and selflessly to protect us all. You served and sacrificed, put yourselves in harm’s way and with bravery knowing the costs. We owe you an incredible depth of gratitude.”

Harry added, “This pandemic cannot end unless we act collectively with an unprecedented commitment to our shared humanity. The vaccine must be distributed to everyone everywhere. We cannot rest or truly recover until there is fair distribution to every corner of the world.

“None of us should be comfortable thinking that we could be fine when so many others are suffering. In reality — and especially with this pandemic — when any suffer, we all suffer,” he continued. “We must look beyond ourselves with empathy and compassion for those we know and those we don’t. We need to lift up all of humanity and make sure that no person or community is left behind. What we do in this moment will stand in history and tonight.”

The concert called on world leaders to pledge a total of $19 billion vaccine doses— the outstanding balance needed by the World Health Organization’s (WHO) ACT-Accelerator to get 1.8 billion COVID-19 vaccine doses, as well as tests and treatments, to the world’s poorest countries by the end of 2021.

Prince Harry & Meghan Markle Are A ‘Distraction’ For The Monarchy

Prince Harry and Meghan Markle are reportedly considered a “distraction” by the rest of the Royal Family, according to Russel Myers, the editor of The Mirror. Myers believes the royals will continue to publicly ignore the fallout from the Duke and Duchess of Sussex’s bombshell interview with Oprah Winfrey.

In a recent interview, Myers claims the interview “went down like a lead balloon” for the House of Windsor. “As far as Harry and Meghan are concerned, I think they will be left to sort things out on their own,” he shared. “They’ve been a distraction for the most part for the family. There will be quite a lot of dissatisfaction within the camp, and it remains to be seen whether they will be brought back in.”

Though Harry recently reunited with his family at Prince Philip‘s funeral, Myers believes the prince returned to the U.K. with “his tail between his legs” because of the drama surrounding his comments about royal life. “Certainly, I’m sure that Harry was a bit sheepish seeing the rest of his family,” he added.

As for the rest of the royal family, particularly Prince Charles and Prince William, they are believed to be “united in trying to get back to business,” according to Myers. Though Charles and William may want to return to business as usual, there’s no denying the public has had a strong reaction to many of the claims made by Harry and Meghan.

Anna Pasternak, author of Princess in Love and The Real Wallis Simpson: A New History of the American Divorcee Who Became the Duchess of Windsor, believes William and Charles will not be able to return to normal. “I’m not 100% sure that we will see Charles ascend to the throne,” Pasternak told Vanity Fair “The Sussexes have sparked something so fundamentally incendiary in this country that it is changing the face of Britain, and I think the monarchy as an archaic institution may well topple.”

One of the ways Pasternak believes Harry and Meghan’s critiques of The Firm could lead to lasting changes within the institution is in the line of succession. “It may be that there is such a groundswell of public opinion against [Prince Charles] that it’s deemed by the firm preferable for William to ascend then because he’s younger, more relatable,” she said.

While Myers disagrees with Pasternak that the monarchy could topple, he does share in her belief that William will ultimately be the one to make a difference rather than his father. Myers suspects the monarchy will “enter a new dawn” when William ascends the throne. “I don’t think it’s the last straw for the monarchy. I think it’s an evolution rather than a revolution,” he added.

Called “America’s Number ONE Gossip Columnist” by The National Enquirer. Rob ‘Naughty But Nice’ Shuter breaks celebrity news every day on his website NaughtyGossip.com where he delivers all the dish about the stars we love in his naughty but nice signature style. You can also catch him co-hosting and breaking celebrity news on Good Day New York, The Today Show, The Talk, Wendy Williams Show, CNN, Extra and Z100’s ‘Elvis Duran.’ Previously, Rob was the Huffington Post’s only celebrity columnist and the former executive editor of OK! Magazine. Rob has also hosted his own Saturday night talk show on Mark Cuban’s channel and his own daily morning show, ‘The Gossip Table,’ on VH1! Breaking some of the biggest entertainment stories, including Jamie Lynn Spears’s pregnancy news, Britney’s first post-meltdown interview, Eva Longoria’s wedding, and baby exclusives for Jessica Alba, Tori Spelling and Mathew McConaughey’s tots, Rob always knows where to find the best scoop. Before Rob was one of the world’s most successful entertainment reporters, he was a publicist working for Jennifer Lopez, Alicia Keys, P. Diddy, Jessica Simpson and Jon Bon Jovi! Now he is bringing all this experience to his new show on I HEART MEDIA in his unique cheeky way, that is always a pinch and never a punch!