In her new memoir, Mean Baby, the actress chronicles her decades-long alcohol addiction, which began at 7 years old, as well as the horrifying personal traumas she endured — including several suicide attempts and sexual assaults.

“I don’t know if I would’ve survived childhood without alcoholism,” she told People magazine. “That’s why it’s such a problem for a lot of people. It really is a huge comfort, a huge relief in the beginning. Maybe even the first few years for me because I did start really young with that as a comfort, as my coping mechanism.”

Blair described the first time she got drunk as a “revelation,” explaining in her book that it started during Passover when she’d be allowed to take sips of the Manischewitz throughout the seder.

“A light flooded through me, filling me up with the warmth of God,” she said of the first time she tasted alcohol. “The year I was seven, when we basically had Manischewitz on tap and no one was paying attention to my consumption level, I put it together: the feeling was not God but fermentation. I thought ‘Well this is a huge disappointment, but since it turns out I can get the warmth of the Lord from a bottle, thank God there’s one right here.’ I got drunk that night. Very drunk. Eventually, I was put in my sister Katie’s bed with her. In the morning, I didn’t remember how I’d gotten there,” she wrote.

Blair wrote in Mean Baby that the alcohol abuse escalated in her teens and 20s, detailing a traumatizing incident during a college spring break trip when she was raped after a day of binge drinking.

“I don’t know if both of them raped me. One of them definitely did,” she wrote, according to excerpts published by People. “I made myself small and quiet and waited for it to be over. I wish I could say what happened to me that night was an anomaly, but it wasn’t. I have been raped, multiple times, because I was too drunk to say the words ‘Please. Stop.’ Only that one time was violent. I came out of each event quiet and ashamed.”

She also wrote of being assaulted by one of the deans of Cranbrook boarding school in Bloomfield Hills, Mich., which she attended as a teenager. It happened the day before winter break during her freshman year.

“I counted on him for everything,” she explained to People. “I really couldn’t believe my good fortune in having such a wonderful mentor and friend. What hurt me from this was that he would make such a mistake. That was it.”

“We embraced. It felt too long and too still and too quiet,” she wrote of the incident in her memoir, according to excerpts. “His hand went to the small of my back, tracing the space just above my tailbone. His lips were on my mouth. Please, I thought. Please don’t go under my pants, my dress-code-approved Ralph Lauren khakis into which I’d carefully tucked a plaid shirt Please. You are a grown-up and I love you; please do not put your hand inside my pants. But he did. It was a simple thing. He didn’t rape me. He didn’t threaten me. But he broke me. Nothing ever happened again, but I never felt safe.”

She continued: “When I told my mother he had kissed me she took a deep breath. ‘You must not tell anybody. He’s beloved at that school. And you’ll just be a troubled girl . . . I’m sorry.’ At the end of my senior year, he came over to congratulate me for winning a writing award. Then he turned to my mother and said, ‘You must be so proud.’ She just looked at him, stone-faced. Then: ‘I know what you did. Stay away from my daughter.’ He walked away.”

Writing about such trauma, she explained to People, has helped her heal from it.

“I did not realize that assault was so central in my life,” she said. “I had so much shame and blame. I’m grateful I felt safe enough to put it on the page. And then can work on it with a therapist and with other writing, and really relieve that burden of shame on myself.”

“I’m in a good place,” she said now. “I cannot believe all this happened in my life, and I’m still here and I’m OK.”

Blair, who was diagnosed with multiple sclerosis in 2018, has also been open about living with the disease, having detailed her journey in last year’s documentary, Introducing, Selma Blair.

During an interview on the Today show on Wednesday, Blair said she recognized physical signs that may have been indicative of MS.

“I had so many things that were so indicative of MS,” she said of the physical pain she’d been experiencing at the time. “Doctors thought I had leukemia. I didn’t, but it was a constant high fever. … The ailments as a kid connected. I do know for sure I had it by the age of 23. It was definitely there for so long.” 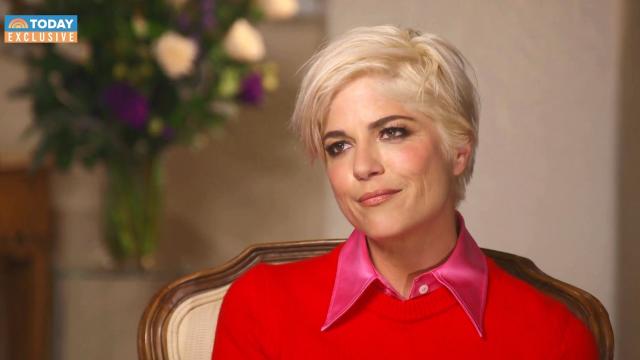 Actor Selma Blair sits down for a candid interview with TODAY’s Savannah Guthrie and opens up about starting to drink heavily from a young age. Blair, who recently released a memoir called “Mean Baby,” also discusses the physical pain she experienced since childhood that would become a multiple sclerosis diagnosis in 2018.

Blair, who’s been sober since 2016, has undergone chemotherapy and a stem cell transplant to treat her MS symptoms. That’s helped a lot with her pain, so much so that she’s back to horseback riding.

“The pain is still there,” she explained. “I’m in remission, I built no new lesions. I still have, you know, some brain damage and things that are there, but I’m OK with it. I’m OK. I’m grateful because I’m doing so much better.”

ORDER A COPY OF ROB’S NEW BEST SELLING BOOK! Called “America’s Number ONE Gossip Columnist” by The National Enquirer. Rob ‘Naughty But Nice’ Shuter breaks celebrity news every day on his website NaughtyGossip.com where he delivers all the dish about the stars we love in his naughty but nice signature style. You can also catch him co-hosting and breaking celebrity news on Good Day New York, The Today Show, The Talk, Wendy Williams Show, CNN, Extra and Z100’s ‘Elvis Duran.’ Previously, Rob was the Huffington Post’s only celebrity columnist and the former executive editor of OK! Magazine. Rob has also hosted his own Saturday night talk show on Mark Cuban’s channel and his own daily morning show, ‘The Gossip Table,’ on VH1! Breaking some of the biggest entertainment stories, including Jamie Lynn Spears’s pregnancy news, Britney’s first post-meltdown interview, Eva Longoria’s wedding, and baby exclusives for Jessica Alba, Tori Spelling and Mathew McConaughey’s tots, Rob always knows where to find the best scoop. Before Rob was one of the world’s most successful entertainment reporters, he was a publicist working for Jennifer Lopez, Alicia Keys, P. Diddy, Jessica Simpson and Jon Bon Jovi! Now he is bringing all this experience to his new show on I HEART MEDIA in his unique cheeky way, that is always a pinch and never a punch!